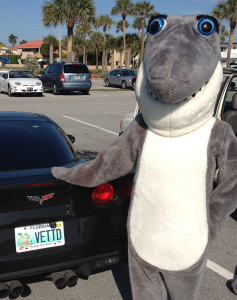 As Director of Communications for Mote Marine Laboratory and Aquarium — whose mascot is Gilly the Shark — I led public outreach efforts for one of the nation’s leading marine research organizations for more than 11 years. I specialized in translating complex scientific topics for a broad audience, developing relationships with local, national and international media and was responsible for evolving a simple newsletter into a successful feature-focused publication (Mote Magazine) that was accessible to an audience with general — not scientific — knowledge. My writing and editing also supported fundraising, volunteer and members communications and the development of content that was showcased in Mote Aquarium, a public attraction visited by 300,000 to 400,000 guests annually. Today, Mote remains one of my main clients.

No doubt, GCOOS is one client with a mouthful of a name. But their role is critical to the five U.S. states bordering the Gulf of Mexico. If you’re not familiar: coastal observing systems help us understand our oceans — everything from what’s going on under the surface, to monitoring for things like oil spills. Coastal observing systems — which exist around the globe — are sort of like the U.S.’s National Weather Service — they gather data that users need to make decisions about their daily lives — except they’re focused on marine ecosystems.

“Vetted has helped us gain visibility with internal and external audiences. That’s important for us as an organization that often operates under the radar. One of my goals as the Executive Director of GCOOS is to raise the visibility of our organization with the public so they know about the tools we have available for them to use. Vetted is already doing that for us by developing a strong media database, a system to send out press releases and creating new opportunities for us to communicate with our own stakeholder groups.”

As the largest natural and cultural history museum on Florida’s Gulf Coast, the South Florida Museum offers engaging exhibits as well as educational programs that interpret the scientific and cultural knowledge of Florida, the world and our universe. In addition to permanent exhibits, the Museum features a constantly changing lineup of temporary exhibitions — offering something new to discover with each visit. It also has an out-of-this world Planetarium with state of the art technology and a Manatee Rehabilitation Aquarium where they take care of manatees until they’re ready to return to the wild.

“As the end of the year approached, we found ourselves in need of some help with writing for fundraising communications, press releases and enewsletter communications. Vetted Communications was there — and they were there fast and on target. We’re a small ‘shop’ when it comes to fundraising and public communications, so it was great to have someone who could jump in, learn what we needed and support our staff as we got the job done. And Nadine is great to work with and we consider her an important part of our team.”

At Vetted Communications, there will be no unhappy clients. You can drive that to the bank.

Where the Rubber Hits the Road